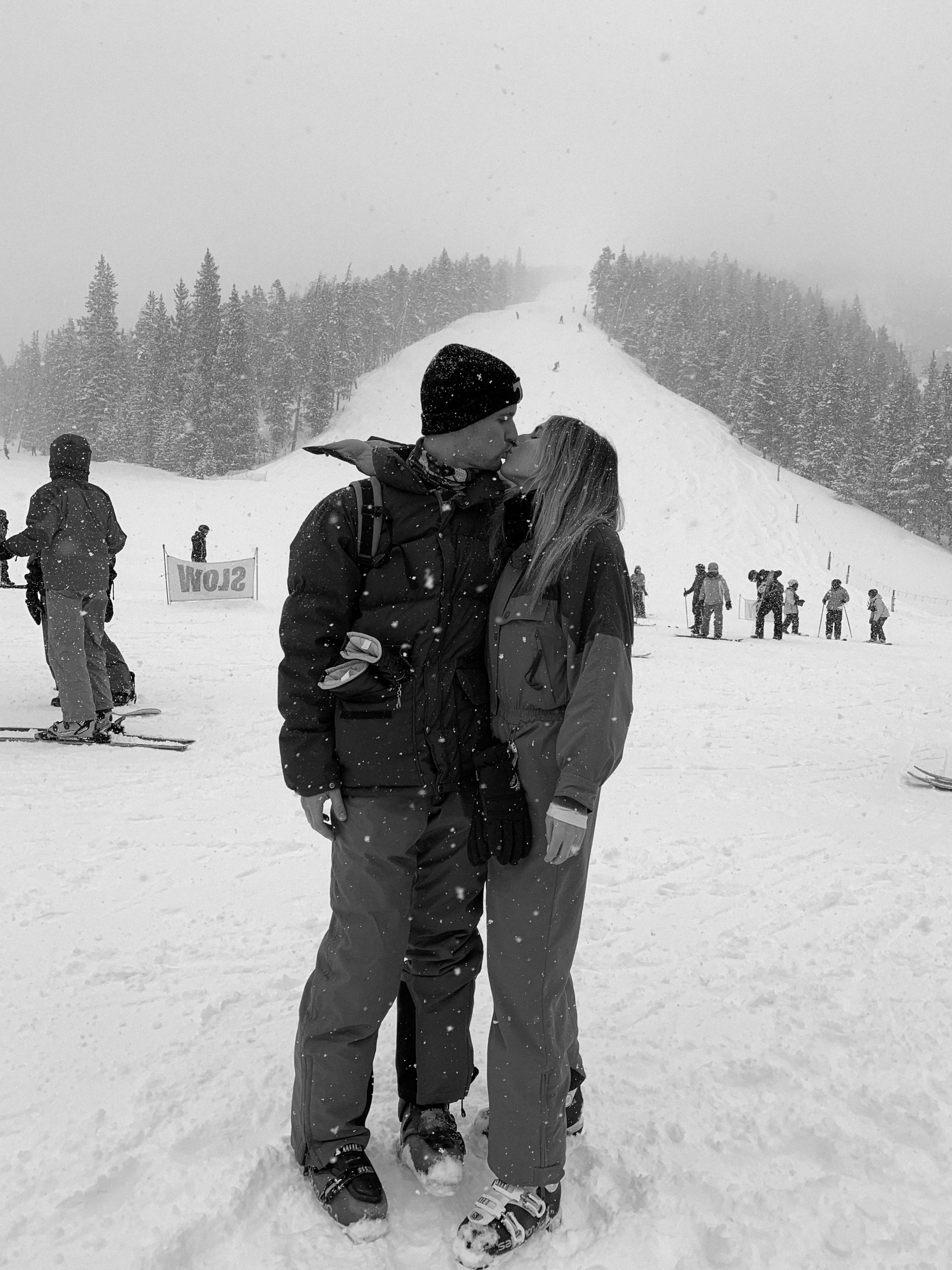 It's been a little over a month since one of the best days of my life! A day I have always dreamed of. February 9, 2020, Preston asked me to be his wife and I couldn't be more smitten by the thought of that. To say I didn't see it coming is a big understatement! Every girl (at some point in their life) dreams about their soulmate. The person that they will spend forever with and to get to say that is Preston is so calming and exciting.

If you didn't catch my blog post about how we met you can read all about that here! In the beginning of our relationship we decided that a yearly ski trip with our friends would be fun. Now, I'm not a huge fan of the cold but Preston loves it. That's compromise, right? It's been such a fun little tradition we've started and each year with its own memories and funny stories. This year was a little different in more ways than one obviously 😉

This year we went to Keystone, Colorado. Knowing what I know now (Preston wanting to propose on this trip), I can only imagine what was going through his head when things weren't exactly going as planned. To start out, our flight got delayed for a few hours. So what was an early afternoon arrival quickly turned into evening. Airport food, drinks and card games were our entertainment for the next few hours until boarding.

Upon our arrival to Denver we were informed that all roads to Keystone were closed due to the snow storm. Originally we were supposed to be in Keystone early that Friday afternoon to pick up our ski gear, get checked in and etc. Since that obviously wasn't going to happen, Preston and I decided to roll with the punches and make the best of it. We had dinner with our friends in Denver that evening and decided to try and get as close to Keystone as we possibly could.

A couple hours in and we couldn't go much further due to closures so we stopped at the CUTEST boutique hotel in Golden, CO. It's called The Dove Inn and if you're ever in Colorado I highly suggest staying there! It's definitely such an Instagrammable place.

The next morning, we got up around 5am to check the status of the road conditions. Everything appeared to be open so we decided to go ahead and get on the road. Tired, coffee in hand and so far nothing going as planned, it honestly couldn't have been more perfect to me. We got to listen to some peaceful music, watch the sunrise together and drive through the most beautiful snow covered mountains I had ever seen. These photos definitely don't do it justice! 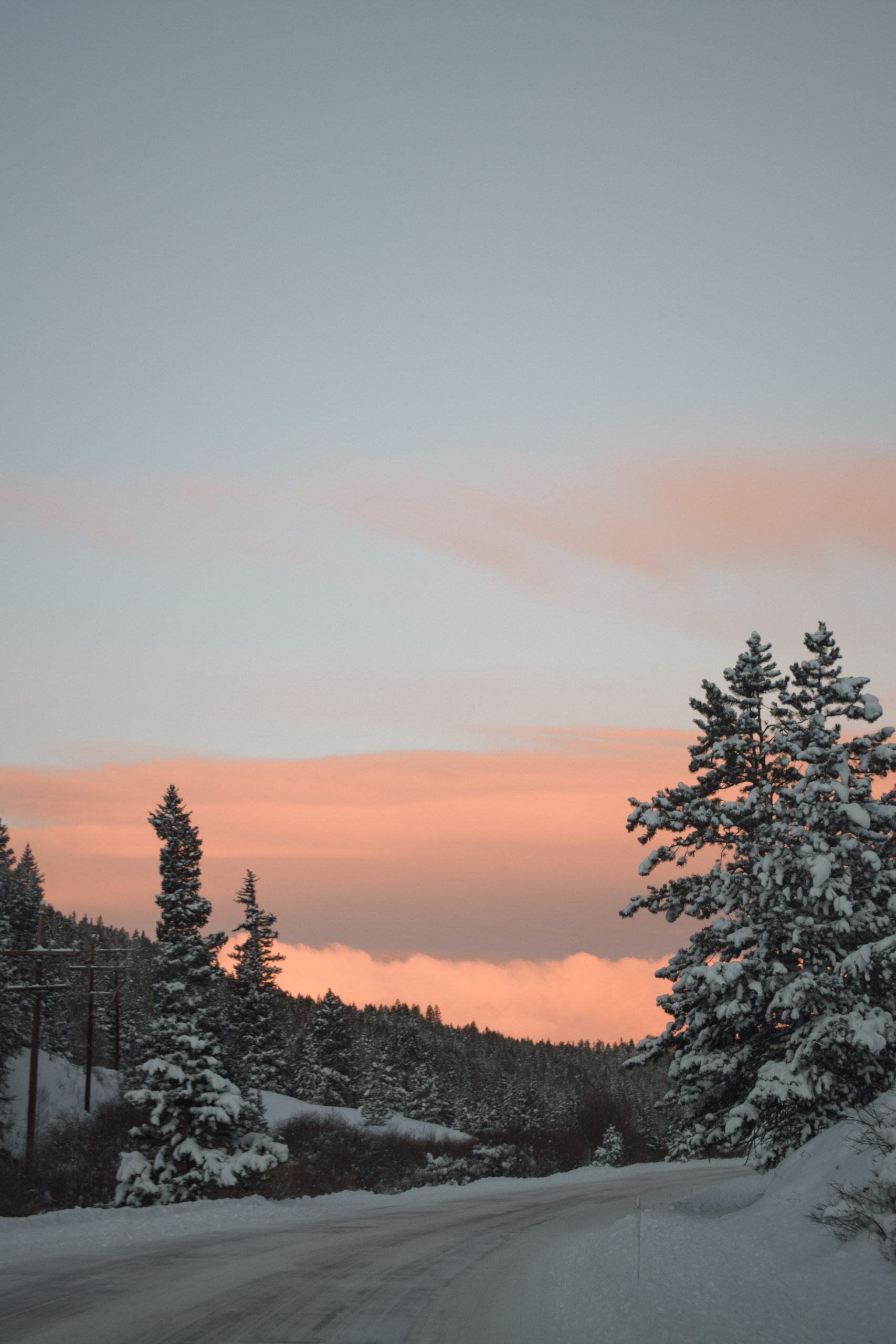 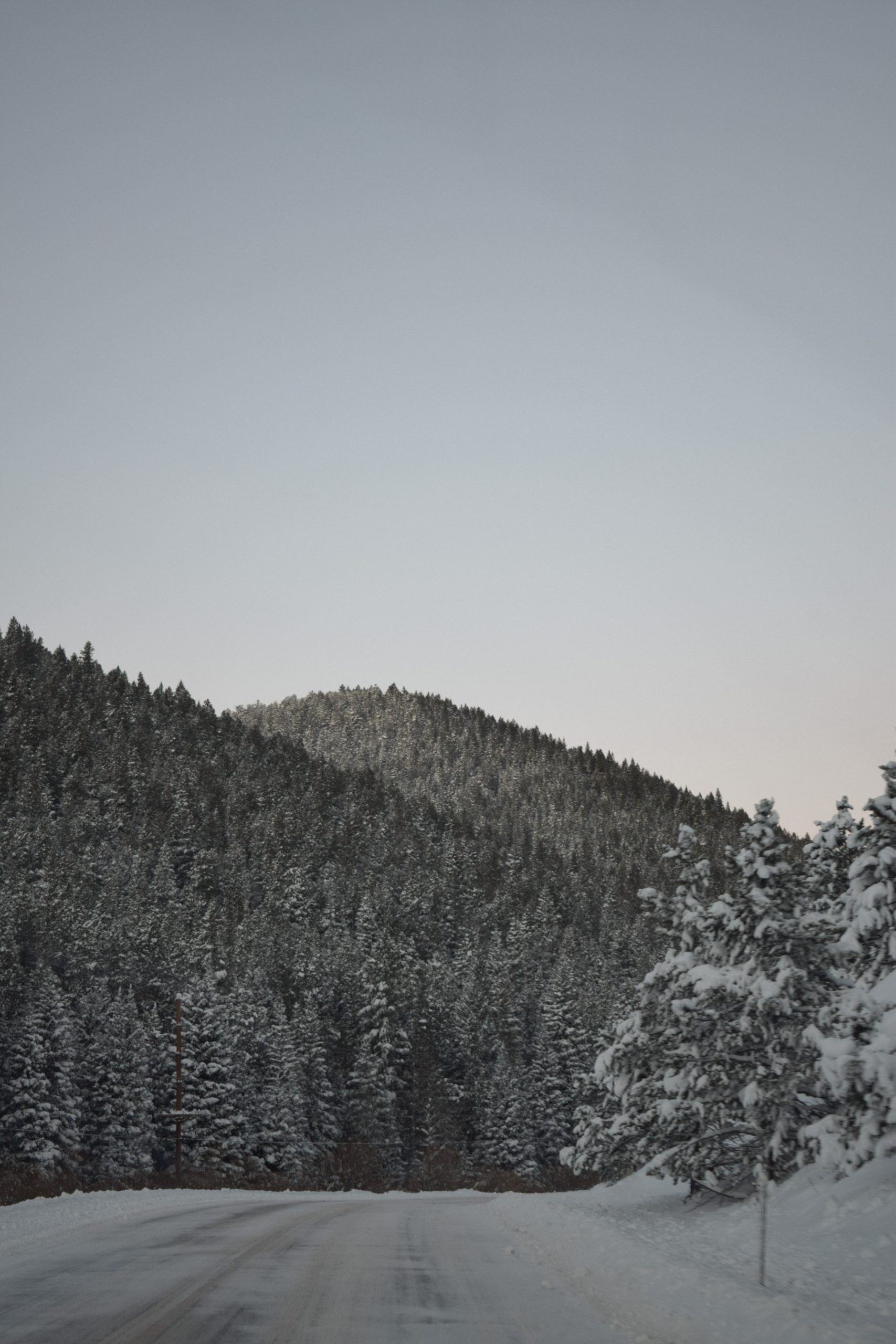 Finally, we arrived to Keystone, immediately checked into our place, got our ski gear, lift tickets, changed and hit the slopes. Our friends weren't going to be in for another couple hours so we took the time to ski just us two for a bit. After an afternoon of skiing, our plan was to have dinner at a restaurant on the top of the mountain (where Preston was originally going to propose). The restaurant called him to say they were closing due to the snow storm. They also mentioned they weren't going to be open the rest of our trip. I can only imagine what was going through his head at that very moment. He definitely played it off because he didn't seem bothered at all about the cancelation. We ended up staying in that night cooking dinner together.

Sunday morning I woke up with no idea this would be the day that my life would change forever. We woke up, had breakfast, changed and hit the slopes with our friends. At the bottom of the slopes as we put on our ski boots and put our regular shoes away, I picked up this pair of socks in his bag and told him to put them somewhere they wouldn't get wet from our shoes. I had no idea that MY RING WAS IN THERE! Preston played it so cool but I'm sure he was thinking, PLEASE DON'T TOUCH THOSE!

After a fun day of skiing we decided to check out the Dillon Ice Castles. I have honestly never seen something so incredible! It was lightly snowing that day and we were surrounded by these amazing icicles. All of a sudden, Preston grabbed my hand, turned me around and said something along the lines of "all of our friends are here, I can't think of a better moment. I love you so much, will you marry me?" He pulled the ring out of his pocket and got down on one knee. I honestly blacked out while this was going on due to pure excitement so safe to say I had to ask him afterward what exactly he said. I of course cried. You know the ugly bury your face crying? Ya, that was me! That very moment I said yes! Over and over again. He put the ring on my finger and I started to cry even more. 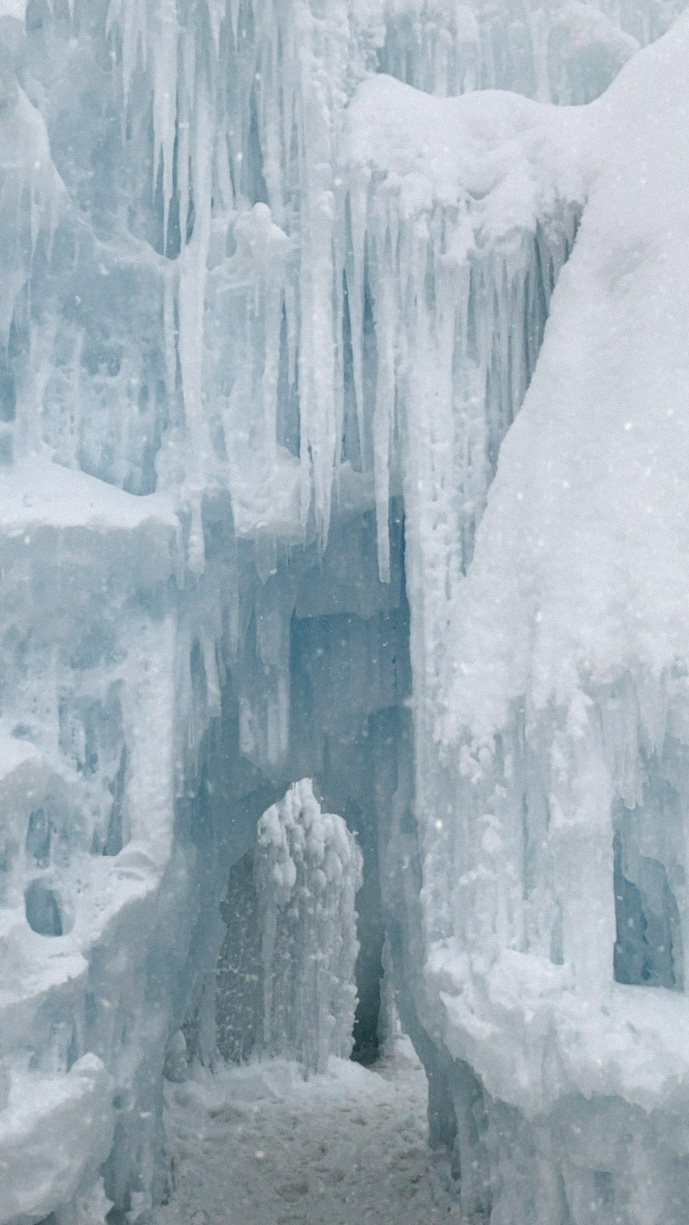 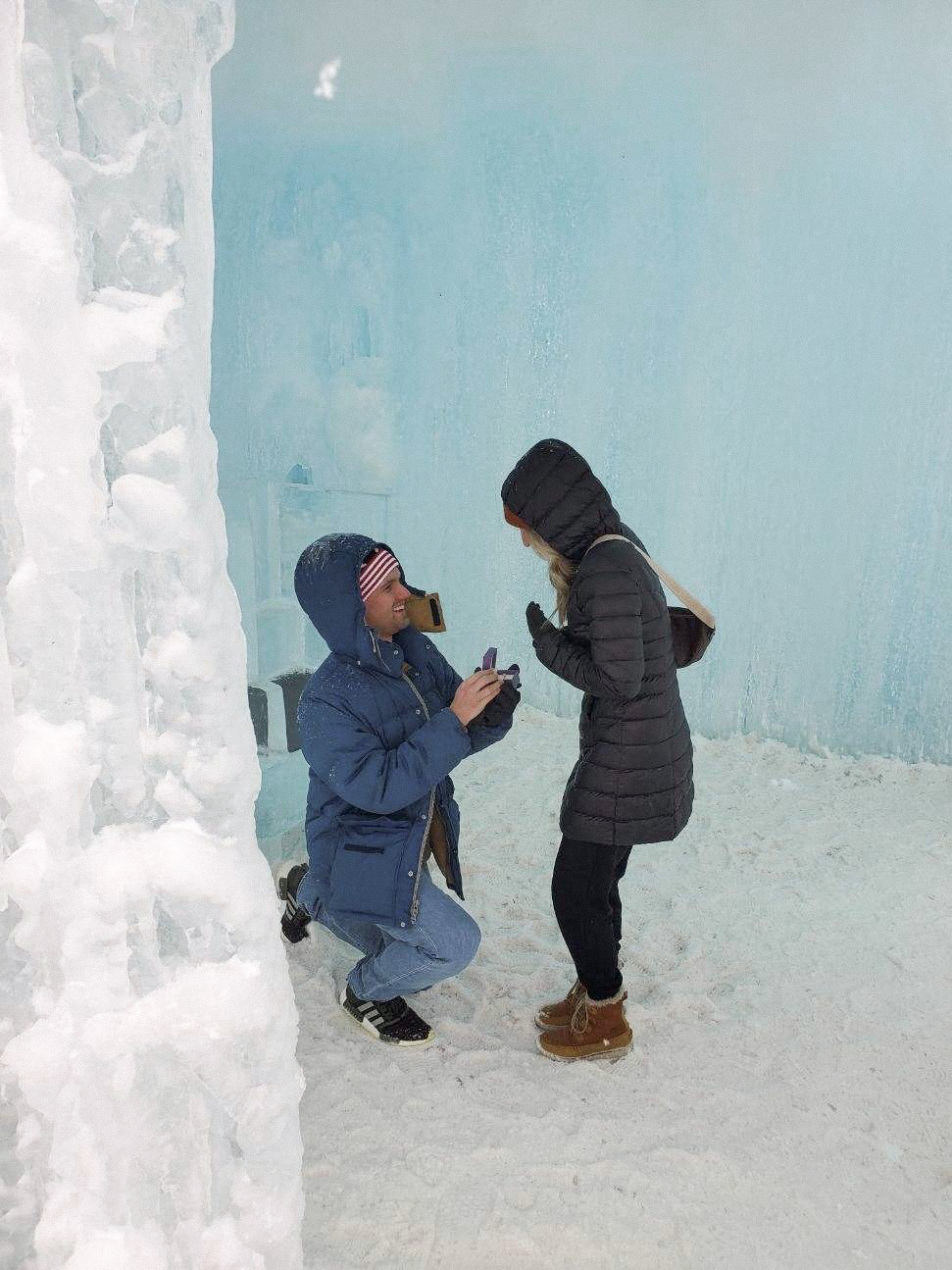 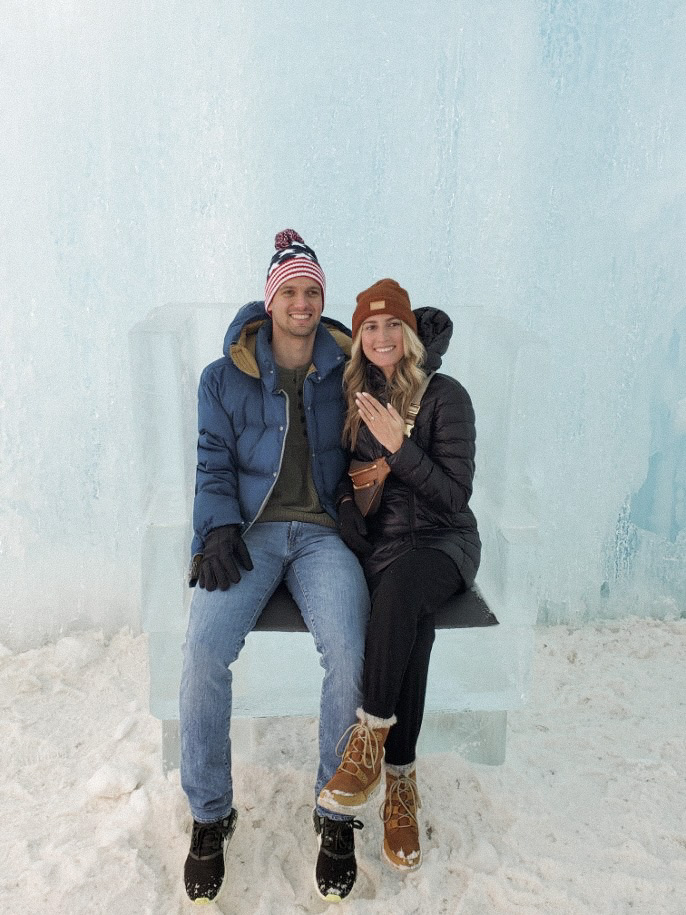 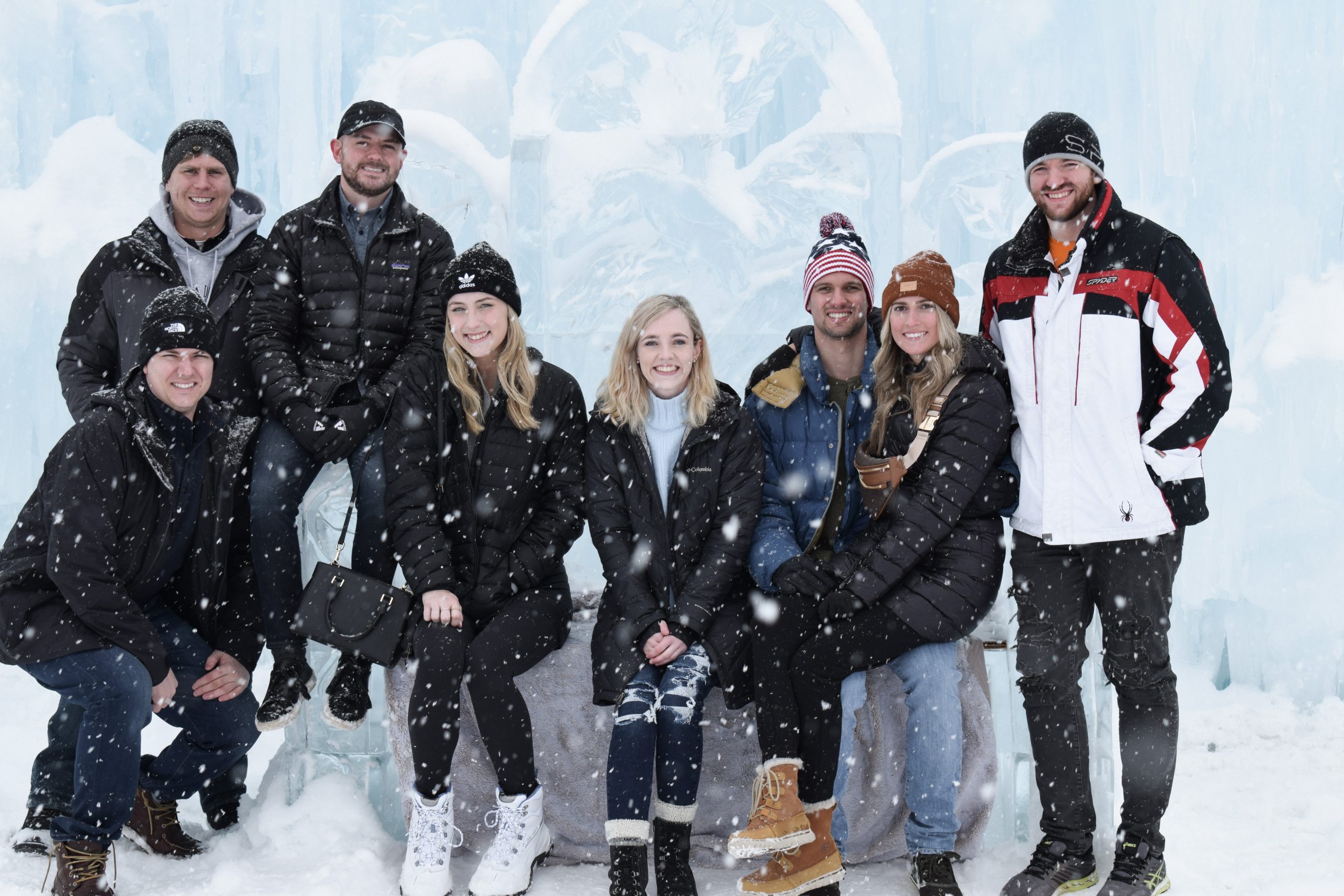 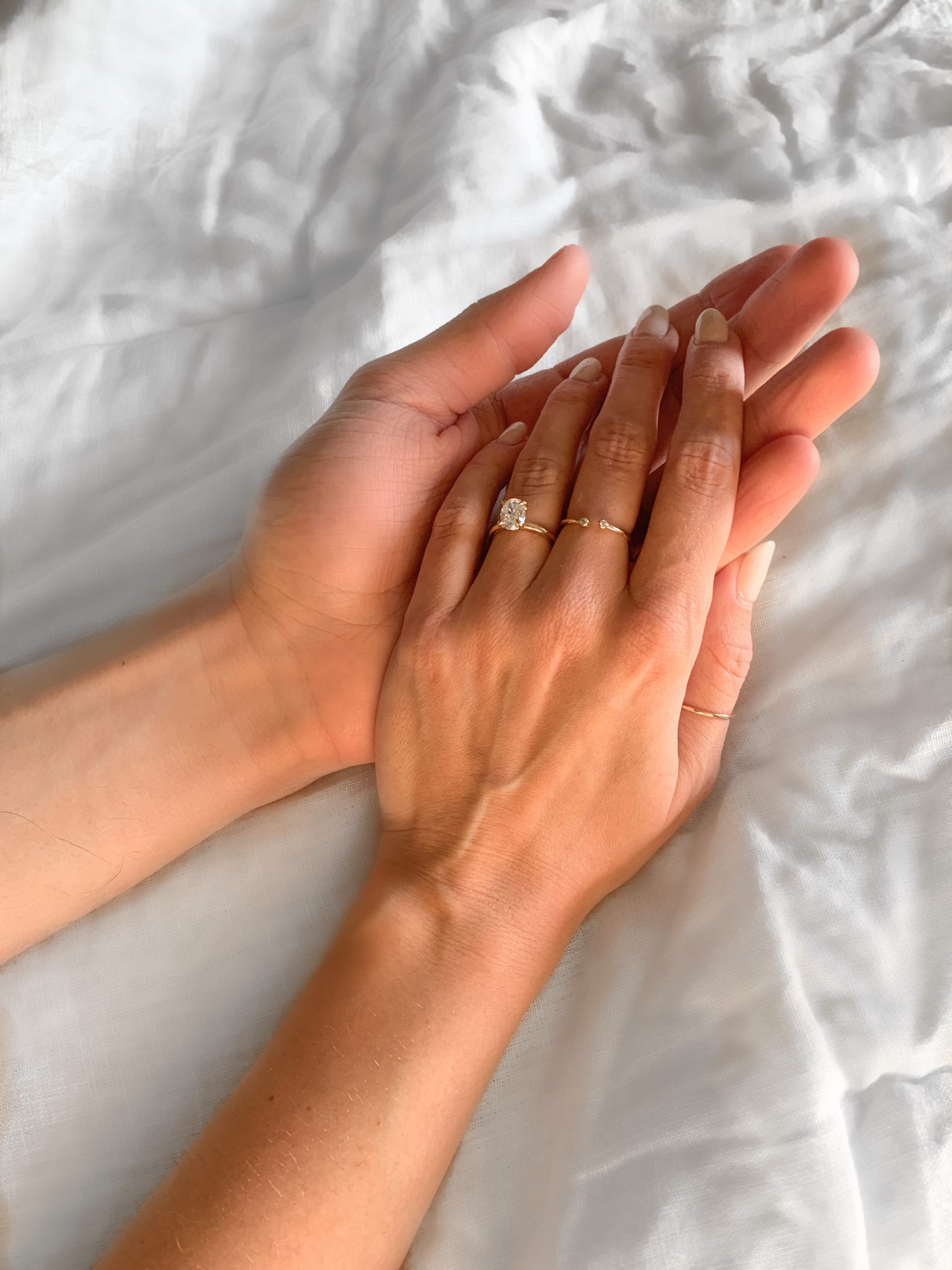 We spent more time enjoying the Dillon Ice Castles and all of its beauty. Had a snowball fight, went down the slides and just took in every moment. After we got back to our place we facetimed our friends and family. I couldn't wait to share the exciting news!

That weekend was everything and more to me. With every thing that didn't go right there were millions of things that did. Even better than I could have ever imagined. Preston really took his time to plan out such a special day for us and I feel so lucky to have said yes to such an incredible man and partner. Someone who supports me, challenges me and makes me laugh even when I don't feel like laughing. I simply cannot wait to see what the future has for us. The future Flowers 🙂

Preston was very adamant on not ring shopping together. He wanted absolutely everything to be a surprise. Now, this was a little nerve wracking to me because everytime I tried to talk about my style/what I liked he would reply, "you get what you get". I thought well.. this will be the defining moment on if he knows what I like and well HE DOES! I mean wow! He really does pay so much attention to me and the details because he nailed it! Preston found an amazing jeweler in Plano, TX. Jalin Jewelers has been the utmost amazing people to work with. They are incredibly quick in anything that they do. I had to get my ring resized and they had it back to me within two days!

Thank you again to each and every one of you for making this time in our lives so special. I enjoyed reading every sweet message that day. To those that have known us (or just me) for years, to those that are close to us, I'm so thankful for you all. You've watched as my story has unfolded over all of these years and I cannot thank you all enough for your love and support! We've slowly started to plan our wedding and I can't wait to take you all along through this journey! Already dreaming of June 5th, 2021!

You may also enjoy:

LET’S BE FRIENDS ON SOCIAL!